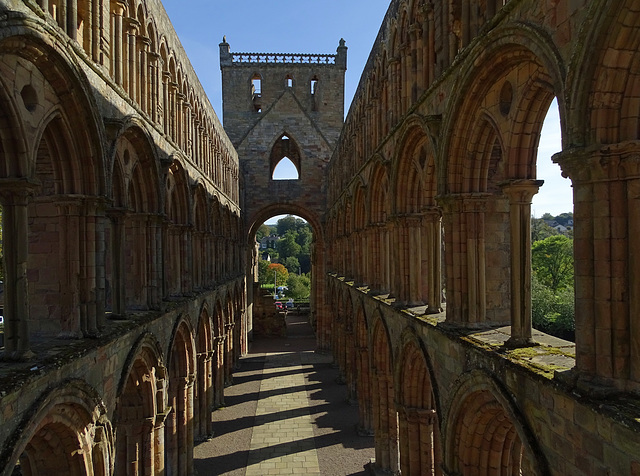 Jedburgh Abbey, a ruined Augustinian abbey which was founded in the 12th century, is situated in the town of Jedburgh, in the Scottish Borders.
The foundation appeared to have the status of 'priory' in the early years and a man by the name of Daniel was described as the Prior of Geddwrda in 1139. The church was later raised to the status of monastery before becoming, in the years prior to King David's death in 1153, a fully fledged abbey dedicated to the Virgin Mary, probably in 1147.

MichaelD, Colin, Nouchetdu38, Erhard Bernstein and 12 other people have particularly liked this photo

Daniela Brocca club
A beautiful place, Amelia, It's the first time I see photo of it.
7 months ago. | Permalink

tiabunna club
Well taken, Amelia, it must have been quite remarkable in its time.
7 months ago. Translate | Permalink

Gudrun club
I find the first floor view even more impressive than the ground floor! I never managed to visit the Border abbeys except for a very short stop at Kelso long ago....
7 months ago. | Permalink
Amelia Heath club has replied to Gudrun club
We visited Kelso abbey the following day, Gudrun. It was the only one that was free to enter. Just before we went up to Scotland we paid to join 'Historic Scotland' which allowed us into the abbey grounds of Melrose, Dryburgh, and Jedburgh. We'll have to visit Scotland again next year to get the most from our membership. ;-)
7 months ago. | Permalink
Gudrun club has replied to Amelia Heath club
Many years ago I had a membership for the National Trust for Scotland. At the time this also allowed free entry to all English NT sites. As a Swabian (the German equivalent of the thrifty Scots) I made the most of the cheaper NTS membership;-)
7 months ago. | Permalink