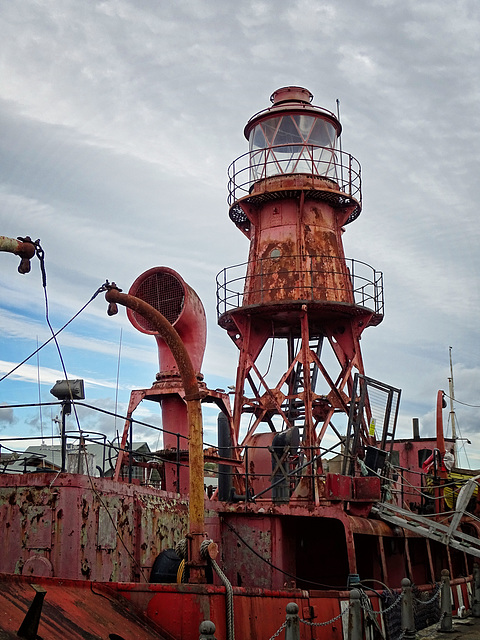 The lightship, built on the Clyde in 1933, was stationed off the notorious North Carr rocks, a mile and half from Fife Ness, until 1975, a crucial part of the life saving network operated by the Northern Lighthouse Board.

In May 1976 the North Carr Lightvessel was sold to the North East Fife District Council, and in July 1976 it was used as a floating museum based in Anstruther harbour. We have seen it in Anstruther, looking in far better condition.

Since January 2002 the Lightship has been based in Victoria Dock, Dundee and was used by the Maritime Volunteer Service (MVS) as a base for Unit meetings and training. But it has now been confirmed that MVS has sold the lightship for only £1 to Taymara, a Dundee-based maritime charity who plan to restore it. The lightship looks a bit shabby at the moment, but apparently it's just surface rust. I have my doubts. 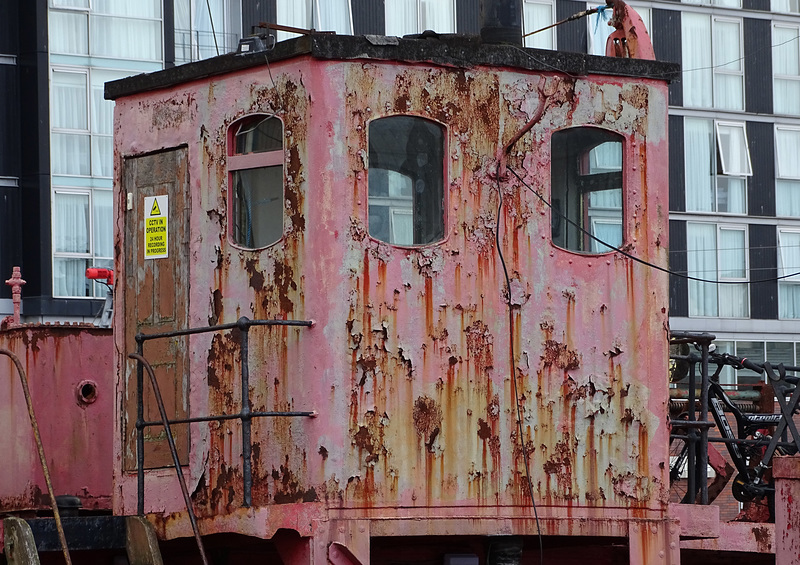 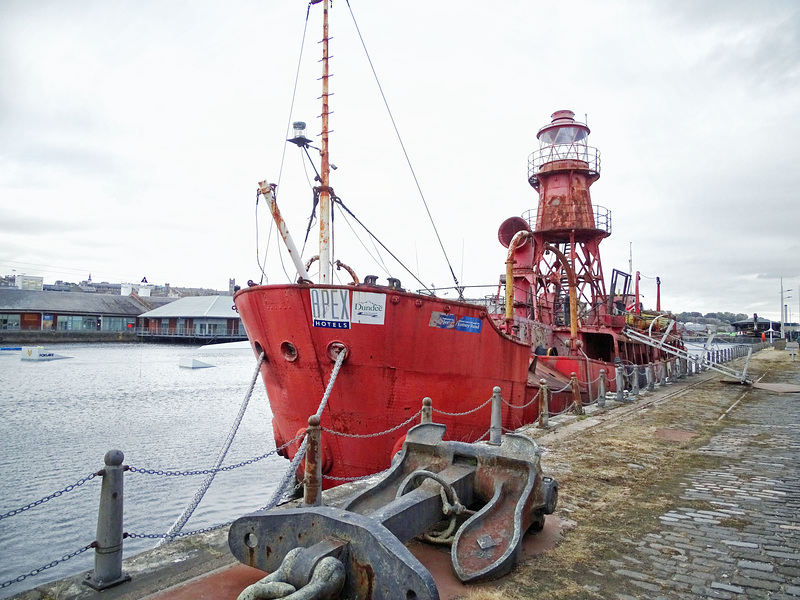 This reminds me of The Vital Spark & Para handy for some strange reason ~ looks like time for some wire brushing and a lick of paint :) xx
4 years ago. | Permalink

I do hope that a proper restoration can take place, Lightships have an important role in maritime heritage.
4 years ago. | Permalink

I remember it well at Anstruther. Beautiful as this rusty shot is, it would be nice to see it restored.
4 years ago. | Permalink

Yes, I suspect it needs much more than a sandblasting, a touch of filler and a pot f paint.
4 years ago. | Permalink

Quiet understand the want to restore it, sort of thing I would be happy to volunteer an hour or so with a wire brush.
4 years ago. | Permalink

Hello Amelia well this project will certainly take a few tins of Rust converter to complete ..but i do hope it is given the time and money needed to complete it ..what an interesting vessel to restore

Amelia,
Best wishes to getting this restored -- it is too important to let the elements lay claim to it.
Peggy
Not far from me, there is a red Caboose -- it was restored by one individual -- she did a great job ~!
4 years ago. | Permalink

Nice details, particulary of the rust.
All the best
Fabio
4 years ago. | Permalink

A wonderfully sharp and detail shot.............I especially like the detail you've shown in the Pip. Very nicely done Amelia.
4 years ago. | Permalink

A great piece of maritime history, although it makes a great subject for photos it's sad to see it in such a poor condition
4 years ago. | Permalink

I like such rusty details!
4 years ago. Translate | Permalink

Colourful rust, but it will be better restored.
4 years ago. | Permalink

You have captured well the textures of the peeling paintwork, Amelia. Cheers, Joe
4 years ago. | Permalink

I love lightships and do hope this will be restored to its former glory! The one in Hamburg is now a party location....
4 years ago. | Permalink

I see you're a fan of old rusty lighthouses. This is fantastic. It won't be easy and also not cheap to restore it. Hopefully it will succeed before everything falls into pieces. That would be a pity!
Btw. you know our restored lighthouse ships. But we also have a number of beautifully restored steam storage locomotives of the old historic harbour railway.

I really hope it is restored. As Jean says, nice picturesque rust, but would be nicer to see it cared for properly.
4 years ago. | Permalink