One of The Good Guys

December 17, 2015 - 20 comments
If you were on flickr and made the leap over to ipernity in May 2013 many of us did, one of the streams that surely stood out for you was one operated by MewDeep6. MewDeep6 is the way John chose to be known hereabouts.

I am not suited to write any kind of biography of the man. What I do know is that I am very lucky to have known him these past few years.

I knew him, I say. How I knew him was through emails and posts on flickr and ipernity. That counts, as any of us here can attest. From exchanged emails with him I came to know a man of heart, generosity, humor and smarts.

John had a career as an illustrator. He was a modest man, and might not have mentioned until he'd known you for a while that he was friend and correspondent of many huge names in the field. He had a soft spot for those great 7Up billboards, posters and promo items, and advertising illustration from the Age of Aquarius in general. He loved the Push Pin Studio artists, and John Alcorn was a special favorite. This is not a definitive list by any means. He loved Wacky Packages art. He loved any interesting creative.

It was after growing concerned about not hearing from him for a few weeks and checking around that I learned John had passed away. It was on November 8, just 5 days after his last posts here. I don't know his family or local friends, so I don't know what happened. I want to know what happened, and I don't want to, if you know what I mean. I just hope the way he went was as gentle and kind to him as John, our own MewDeep6, must have been to everyone he met in life.

Rest in peace, John. We miss you. 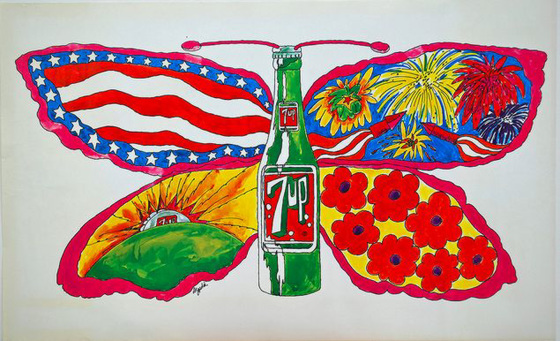 20 comments - The latest ones

Thank you, Bev.
5 years ago. | Permalink

So sad to hear this, Smiley. What a lovely tribute!

I didn't really know John personally, but I certainly knew about him as MewDeep6 here on Ipernity and as MewDeep when he was over on Flickr. If I'm not mistaken, I believe he used to have a number of interesting Ipernity groups that I belonged to at one time.

He will definitely be missed.
5 years ago. | Permalink

Yes he will. Thank you, Alan.

Oh, I knew him when I first came here... He was just Newdeep (without the 6) at that time...
I enjoyded very much his galery... then he desapeared for some times and I thought he was back to flickr..... So I lost touch of him here.
It is so sad to learn that if he his no longer with us it is because he was so ill......
Well, I have gone now browsing through his pictures as some kind of tribute, and for sure he will miss the illustration fan's world...
May he be in peace now, and thank you very much Sami for letting us know.
5 years ago. | Permalink
Smiley Derleth club
has replied to Nylonbleu

Thank you so much, Nylonbleu.
5 years ago. | Permalink

Thank you, Nicolas. There are so many great things to be said about John.
5 years ago. | Permalink

Oh, this makes me very sad, indeed! My own presence here has been sporadic of late, due to some family issues and obligations, and I just assumed he was taking a bit of a break from Ipernity. I would love to be able to learn more about his career and work. I didn't even know his real first name, so glad to know that. I always loved his posts. We had shared a couple of private messages, but I wish I had reached out more. I will miss him, as I would miss any one of my friends here. Thanks for sharing this, Smiley.
5 years ago. | Permalink
Smiley Derleth club
has replied to arts enthusiast club

That is the kindest tribute, arts. Thank you so much for your comment.
5 years ago. | Permalink

Wow! I must say that so far, this year has been a shocking ride. It's strange (and marvelous) how attached to virtual strangers we can become. I really enjoyed MeeDeep's wonderful postings and I will miss them as much. My only consolation is knowing that he can finally meet all of the artists that he admired so much. God bless the Internet!
5 years ago. Edited 5 years ago. | Permalink
Smiley Derleth club
has replied to Isle of Lucy

I love that, the image of him meeting all his favorite artists.

Thank you for your thoughtful comment.
5 years ago. | Permalink

Finding his posts was how I got here. Rest in peace.
5 years ago. | Permalink

Thank you so much, Craig. That's a very nice tribute.
5 years ago. | Permalink

What terrible news. I just stumbled across your post here. I, too, had wondered what happened, but figured he'd just given up on Ipernity as (alas!) so many have.

Thank you for your comment. It is good of you to remember him.
5 years ago. | Permalink

Yes Smiley, a great loss according to your description.
May he R I P.
Very true about having online friends, most never meet, I have met many of those I befriended on Skype way back in 1994, several have been here, I have visited many on numerous occassions, the majority being from Japan and Thailand.
3 years ago. | Permalink
Smiley Derleth club
has replied to Stormlizard club

And I commend you for having met and visited with some of your online friends. When something happens to someone we know from online, there is added regret if we never got to meet them face to face.
3 years ago. | Permalink