March 14, 2018
After the successful take-over of the site by the IMA and the generally smooth running as the site continues, it looks like a great job done, so thanks to everyone involved. However, should problems develop and we still head for a shut-down, and you would like to continue following my world travel and wildlife postings, please search for "aj-worldwildlife" on the Internet and find the "aj-worldwildlife.myspecies.info" URL. I have begun creating a mirror web-site there attached to the Natural History Museum to link in our observations and pictures for educational use. However, I shall be glad to stay here as well, having made many friends, and will resume further updates as soon as I can find the time.

Work Being Done:
2017 Langkawi, Malaysia visit, Moths and other wildlife pictures being finally sorted out.
currently working on a Jamaica Visit from 2016

Recently Added:
Caribbean: 2016 Dominican Republic Scenes and Wildlife - from around the hotel area.
New Camera Update - a bit about our new pocket camera performance towards the end of the article.
Caribbean: 2016 Dominican Republic Moths - A set of species pictures from a recent visit.
Moths in Cornwall: Geometridae - around 100 new species pictures added to the album. Distribution occurrences and local flight seasons now added.
Far East: India & the Andaman Islands 1995 - pictures from a trip added.
Central America, Belize 2001 - some more new pictures added to the album.
Central America, Panama Moths 2015 - a catalogue of moth species recorded at the two Panama hotels that we stayed at.
Central America, Panama Scenes and Wildlife 2015 - more pictures now added showing mainly wildlife and scenes around the Panama Canal, as well as the Miraflore Locks and some ships passing through.
Central America, Belize 2001 - a range of wildlife and caving pictures added.
Family History - More early family pictures added. Can only be seen by family members with an Ipernity ID.
Far East: 2014 Bali, Indonesia Moths - An album of species recorded at the Maya Ubud hotel.
Far East: 2014 Bali, Indonesia Scenes and Wildlife - An album of scenes and wildlife around the Maya Ubud hotel in Ubud.


The pictures and information here in our albums are mainly an overview of our travels, with particular reference to the scenes and the wildlife we have come across on the way. The pictures shown, however, are usually for information rather than photographic excellence, so please forgive us if some pictures are not as sharp as we've come to expect with digital photography. For the older pre-digital period, images have been copied from original colour prints from our print albums where exposures were often uncertain, and not so easily metered, although I may be able to improve image quality using the computer afterwards. These have been taken with a number of Pentax film SLRs, including a Spotmatic, P30, and K1000, usually with a mixture of lenses and adaptors. I am also including stills from our video records as well, if pertinent, and these again, may not be to digital quality, particularly when taken from our older SVHS tapes (although at that time, this was considered a semi-professional format).

From 2004 onwards we went to compact digital cameras, about the size of thick Credit Cards, which have proven very useful for our type of photography. Initially I chose the Pentax Optio S4, particularly because it was suited to Macro work, and in this model, as well as a zoomable Macro facility, there was a super Macro facility which you could go down to 7cm distance and then Zoom in as well (but no Flash in this mode). Over further years, I used it for an enormous number of photographs (~10,000 pictures), predominantly for insect records. As it was beginning to sound a bit rough, after about 6 years of world travel conditions, I decided to get a replacement, and at the time purchased a newer model, the Pentax Optio M50, but, disaster, this one had a Macro setting, but non-zoomable! In desperation, I again returned to our S4, and paid for a Pentax refurbishment, which is still going strong.

This year the M50 gave up the ghost, and was declared unrepairable, so I looked around for a general pocket camera to replace it. With nothing in Pentax range really providing an option, I decided to go for a Nikon Coolpix 9900, slightly larger than the one being replaced, but I was intrigued that it had a 30x Optical Zoom and included shake elimination and also a number of other unexpected bells and whistles. It turned out to be an excellent buy, and I was very impressed with the performance of such a small camera, an example of which is shown below...

From our balcony at the hotel, I could see a small brown blob at the top of a tree about 300ft (~90 metres) away, which looked like a bird so I got the camera to try it out. The first picture (reduced to just 600 pixels wide) shows the normal view and the tree-top is circled. The second picture (also reduced to 600 pixels wide) shows the Camera's view at full 30x zoom. The third picture is the raw image taken by the camera cropped to 600 x 500 pixels. 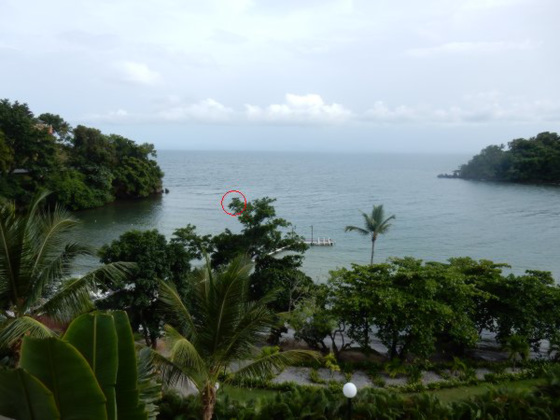 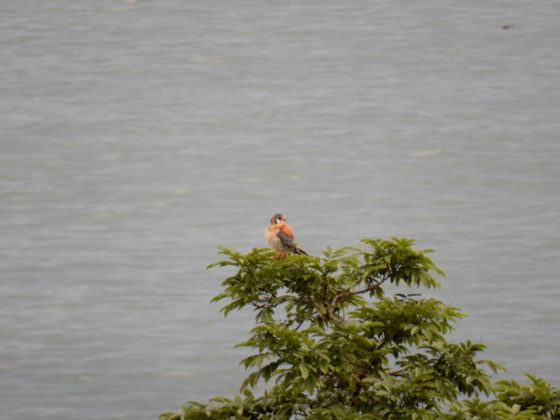 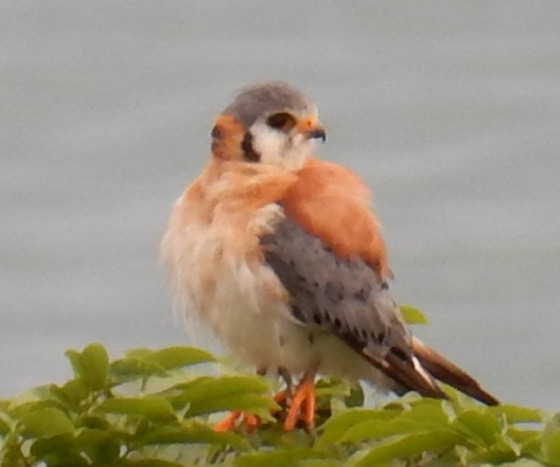 I have tried a DSLR, but found the now heavy camera and lenses discouraging. This small self-contained camera with a wide range of operation in a pocket-sized unit to me makes SLRs of all kinds a bit obsolete. The lens will also work in Macro mode, focusing down to a centimetre. With the 18Mpixel picture resolution, even small items are easily pictured. As an example, the Dominican Republic Moths album DR006 species here contains a picture of a small caterpillar coming out of a 1mm egg!

You may find our pictures of interest if you would like to see a little of the places we've been to, but where people tend to go to the featured attractions of a country, we have tended to look for the ordinary life about us, and and wild areas to see what wildlife is there.

As well as general wildlife, there is a bias to my own particular interest of Entomology, especially in Phasmatodea (Stick Insects) and Lepidoptera (Butterflies and Moths), but where possible I like to properly identify all the animals portrayed, and nothing has been discounted from our attention. With later targeted Moth recording (where the species are then listed in separate Moth Albums), my aim is just to provide a photographic reference to help others with identification, and also to show the beauty of many of the insects we've come across. If you can help with any species not yet identified, please leave a comment so that I can follow the information up. Thanks for visiting our pages, and we hope you enjoy them.
Comments