Part 8a—Dreams of a Big Flower Garden, 1-Month Update: The Good - There are new kids showing their faces, and the seedlings that popped up first are getting a lot big… - June  4, 2014
See all articles... 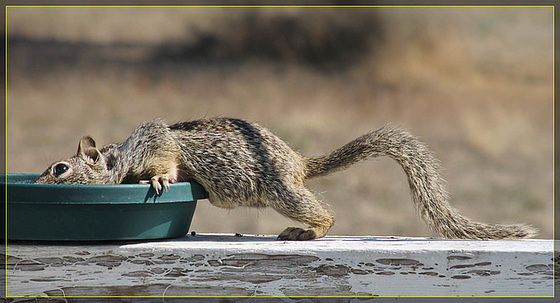 This adorable but detrimental ground squirrel is drinking water out of one of the dishes we put out for the birds.


Raised Bed Garden, 1 Month Update: The Bad (and the sad)
When I was preparing my raised bed, I discovered that many ground squirrel tunnels had been dug through the soft dirt. Although I danced merrily up and down on all the tunnels I found, I knew that sooner or later, I'd be dealing with these adorable menaces that end up being heart-aches.

About a week ago, a goatsbeard flower that I allowed to grow in the corner of the bed began to bloom. I admired it on the first morning, and took pictures of it on the second morning. That afternoon, the flower was just GONE. Alarmed, I looked around to see if I noticed hoof marks from deer jumping the fence. No, everything was ok in that regard. Looking again, I discovered to my horror that one of my flourishing Common Sunflowers (Striped Sunflower Seed) right next to the Goatsbeard had been eaten, leaving just its stem sticking out of the ground. What could it be? I immediately thought it must be a ground squirrel. I left feeling worried and quite concerned.

The next morning, both Goatsbeard plants were eaten almost to the ground, flower stalks gone, and another sunflower seedling was eaten as well. "THAT'S IT." I growled under my breath. "Now you've pissed me off...this is war."

I began examining the outside of the bed, checking for holes. On the far side, facing the meadow, I found a gigantic hole tunneling under the bed, and another one tunneling up to the one of the paths through the bed. "RASSIN FRASSIN FRICK FRACK GRAHHHH!!!! You little STINKER!!!" Reaching my hand into the hole, I could feel that it went back and then down, as I knew that it would. "You are NOT welcome in my garden!!!"

Marching back to our storage shed, I grabbed one of our live ground squirrel traps, got some sliced vegetables and apple, and went back to the hole. Placing the trap in front of the hole, I used bamboo sticks to and dirt to make it impossible to go anywhere but into the trap. Not that I thought it would go into the obvious trap, but hey, it was worth a try.

I'd seen a particularly brazen ground squirrel frequenting the dishes of water I put out for the birds to drink, and it had gotten so comfortable that it would sit on a post looking around for 10 minutes at a time, just hanging out. I was pretty sure that was our culprit, though to be honest, there are many, many ground squirrels on our property, but only a few come close to the house.

I checked the trap several times that day and the next, but there were no outraged guests. On the other hand, there was no more damage to any of my plants either. The ground squirrel sat on the post from time to time and I shook my fist at it and growled.

Each day I told Steve about the situation, and it was clear that the real only option for us was the one we don't like, but it's permanent and it works. Because ground squirrels pose a real danger to the foundation of our house, we must get rid of them, and since the traps aren't very effective, Steve has had to resort to shooting them. It's very sad because they are so cute. It's not their fault that we moved to their wild home, but at the same time, we can't allow them to ruin the foundation under our house and...we can't allow them to destroy my garden.

Saturday morning, the groundsquirrel sat on the post. A few moments later, it was first come-first served food for the coyotes, foxes, buzzards and bobcats that make regular rounds here. :(

My garden is safe from ground squirrels for the time being, but there will be others. As this land becomes a parched desert, my two gardens full of delicious greenery, moist, rich soil and fragrant flowers will be enticing to the point of desperate acts by the many animals that live here. I don't want to wage war on these animals, so I hope that my fencing will let them know they should not try to get in.

Next: Part 8c—Dreams of a Big Flower Garden, 1-Month Update: The Ugly

What a shame Janet - although I can fully understand that you need to keep the numbers down. They are adorable though - but they're not undermining my property.
7 years ago. | Permalink
Janet Brien club
has replied to Jenny McIntyre club

They are so cute, especially the babies! We do love the little buggers, so it's that much harder to kill them :( :( We have tried everything else but in the end, this is the only thing that really works. :( It sucks.
7 years ago. | Permalink

I love squirrels, they're so comical. But it's frustrating when they undo all your hard work.
6 years ago. | Permalink