Part 10: Dreams of a Big Flower Garden: An Explosion of Color!!

July 21, 2014 - 13 comments   |   Translate title into English
Despite the attacks from insects and ground squirrels, my raised bed garden has flourished and is an Eden-oasis in the middle of our bone-dry property! 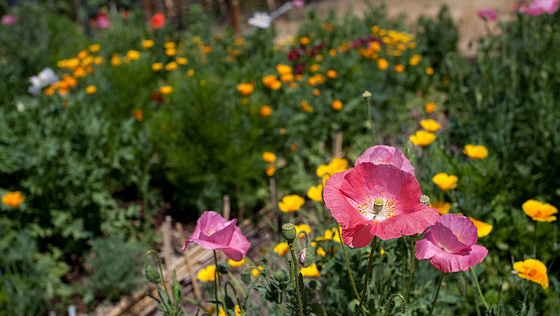 This lovely sight is one which awaits me every single morning! A sea of bright poppies with a sprinkling of other flowers too, fill me with happiness and amazement! By the day's end, the sizzling heat of our 100-degree days along with high wind blows all the petals off the delicate Corn poppies, but the next morning there is a brand new show to see!

It's been a long time between posts, and wow have I been busy! Battling the insects—both inside and out—and ground squirrels, watering the garden and taking pictures, on top of work projects and chores around the house, my time on ipernity has been cut down a lot. Quite frankly, I also wasn't in the mood to take pictures, comment or write any articles because of all of the attacks in so many forms. I was worried that all of the work I'd done to build my garden was going to be destroyed, and that ruined any creativity I might have had. 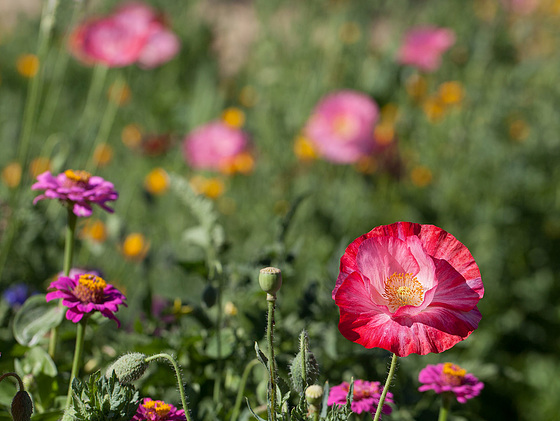 This is my favorite poppy in the garden right now, with ruby edges and a blush-pink center. Just behind and to the left you can see some of the colorful Dwarf Zinnias, and filling the background are pink Corn poppies and orange California poppies.

I needn't have worried so much. I did have to work hard to beat back the bugs and I needed to fortify my fence line from marauding squirrels, to plug the holes they dug, and check for new invasions many times a day, but my work has paid off. On June 21, the first False Sunflowers began to bloom, and soon after, the first Zinnia, and on the Fourth of July, the first California poppy bloomed, and from that day onwards, the flowers have exploded! Poppies of many kinds, Bachelor Buttons, African Daisies, Morning Glories, Snap Dragons, Anemones, Baby's Breath, so many beautiful flowers!!

I even have flowers that make us laugh our head's off...we had to empty some old dirt out of pots used for our tomatoes last year, and so I put it into the raised bed. What do you think I found growing here and there?! I have counted FOUR tomato plants, and all of them have flowers and tomatoes growing on them now! We laugh every time we see them! I can't wait to see what they will look like when they are ripe!

Wide Angle View of My Garden
Below are a couple of pictures of the overall garden so that you can get an idea of the scope of the flowers, followed by more of my blog and some "beauty shots" for some WOW factor! :) 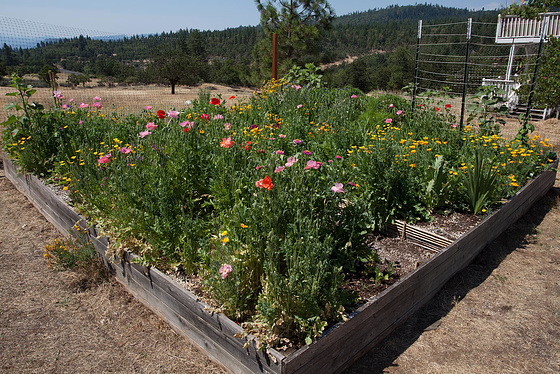 This is my garden from the north-east corner. It's a sea of poppies! You can see my string lattice on metal fence posts set up on the north-west (right corner), where the Morning Glories and Cardinal Creepers are starting to climb (you can see the green leaves growing up the right-most post). The left corner, or south-east, shows a sunflower growing in my "Wildflower section", which also has a very fast-growing blue-purple morning glory vine growing up its own small trellis, and it's also growing up the sunflower!! Just visible in the south-west corner are the yellow False Sunnies, and between them and the metal posts are my Maximillian Sunflowers, which are a wall of green right now except for a colorful poppy sticking its face up through the leaves here and there! 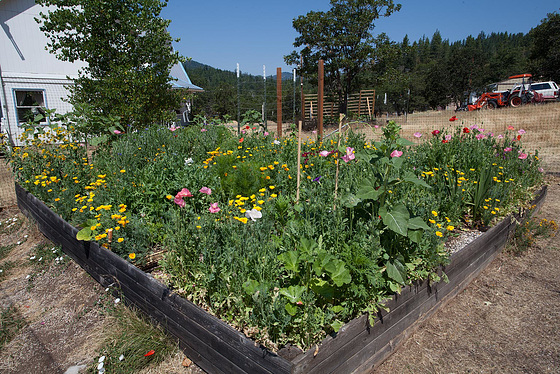 This is my garden from the south-east corner. In the corner I've got King Henry Hollyhocks planted (roundish leaves), and even though this is a bi-ennial plant, which means it flowers every two years, they will sometimes bloom the first year, and one of them is in heavy bud right now! You can also see the large sunflower leaves a bit on the right of the Hollyhock leaves. In the left corner (south-west) is my False Sunflowers, which are mostly faded now but still with some flowers. The bright yellow and orange that you see are all California Poppies!

Daily Flower Explosions, and a Bee's Paradise!
Every morning just as the sun is coming up, I go out to the garden and witness the breathtaking beauty waiting for me there. Before the dawn, countless poppies have begun to open and as the day brightens, hundreds of honey bees—and many other bees too—descend upon the opening flowers in a frenzy of nectar feasting! It literally sounds like a bee hive in the garden as the bees crawl over the poppies and fly from blossom to blossom. I often see five or six honey bees on one flower, it's just incredible! With so many bees—and I'm not exagerating when I say there are hundreds—you would think I'd be frightened, but I'm not worried because they simply couldn't care less about me. As I make my way slowly up and down the aisles of my garden and around each side, I peer closely at the bees crawling and buzzing around the flowers, marvelling at the wonder of it all. They seem mad with ecstasy and I am so happy because I know that the honey bee is in decline all over the world. But not here. I've never seen so many honey bees before, and I wonder if there might be a bee keeper somewhere nearby. Other than the honey bees, several species of bumble bee, sweat bee, and other species make their rounds too, as well as various wasps, flies, beetles, butterflies, skippers, moths and other insects. It is indeed an oasis. I couldn't be happier. Below are a few more beauty shots, ENJOY! 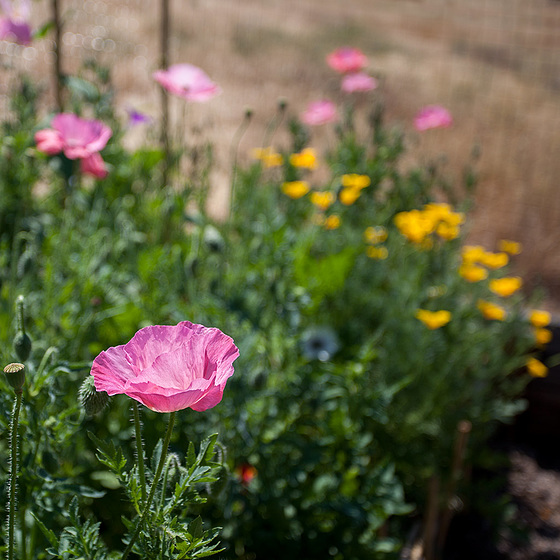 A bright pink Corn poppy with more in the background with bright orange California poppies to complete the display. 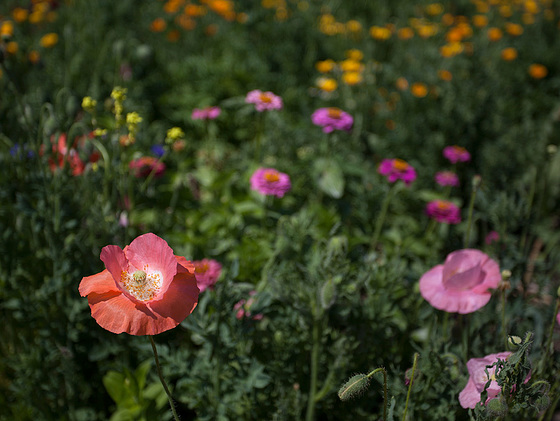 A lovely salmon-pink Corn poppy with red and pink ones on the left and right, a rainbow of pink Dwarf Zinnias in the middle ground with yellow wild mustard flowers to their left, and California poppies dot the background with orange bokeh. 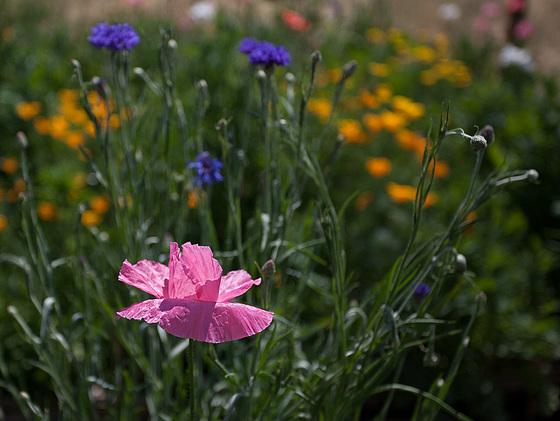 Another bright pink Corn poppy with rich blue Bachelor Buttons behind and California poppies sprinkle the background with orange.

William Sutherland, Chrissy, guenievre and 2 other people have particularly liked this article

13 comments - The latest ones

Oh your corn poppies are amazing - I'd love some pink poppies - I've got some similar but they've not got the single layer of petals - your garden is absolutely stunning and what a vista across the forests - you do live in a spectacular area.

I can fully understand how disillusioned you must have felt with all the hassle you had with ants, ground squirrels etc. All your hard work being taken over before the plants had a chance to grow - so disappointing.

Love the shot of your whole garden - who's that going up the steps of the house - it must be so wonderful having that view on tap every day.

Yes it's wonderful to see bees taking the nectar in, that's why I tend to grow wild flowers because they're the ones the bees need.
8 years ago. | Permalink

Nice to see that it was all well worth the effort Janet.
8 years ago. | Permalink

Just so glad you got the Garden you worked so hard for.. I understand th anger and disappointment when it started to fall apart.... had it for 3 years now.

The Sunnies are self seeding as the stand there! They will rebloom as new ones grow.. there is still time

You have done a fabulous job in your climate Janet
8 years ago. | Permalink

I can see what you mean about your dry section, Janet. It really emphasises the amount of hard work you have put into your flower patch! I hope it will all reseed and sprout for you again next year.
8 years ago. | Permalink

Congratulations you have made it beautiful lovely colours in the flower beds
8 years ago. Edited 8 years ago. | Permalink

What wonderful colours contrasting with the arid land behind ! Congratulations, Janet !
8 years ago. | Permalink

Oh Janet, your garden is so beautiful! Those poppies are to die for! Your photographs are delightful to look at! I wish you continued good luck with your garden, and hope you get a bountiful crop of tomatoes!
7 years ago. | Permalink

:-) How serene and refreshing one might feel when one gazed upon this explosion of colours!
6 years ago. | Permalink

Amazing how you got so many flowers to grow in such an environment! Great blog and photos!
6 years ago. | Permalink

A feast of colors and for me as a newbie a perfect demo of how to use ipernity features!
6 years ago. | Permalink