Part 2—Dreaming of a Big Flower Garden: Time to Get Serious - With the success of my front garden and metal feed trough planter, I began thinking about how nice i… - May 28, 2014
Part 1—My New Adventure: A Raised Bed Flower Garden! - May 28, 2014

How To Move The Position of Your Pictures in Your Stream - How many times has it happened to you that you've uploaded some pictures but they're not in the orde… - November 28, 2013
See all articles...

May 28, 2014 - 4 comments
For the first time in my life, I'm going to have a big flower garden! I'm really excited and would like to share my adventure, so I'm going to write about my experience as it unfolds, beginning with a bit of history in this article—let's just say I I haven't always been a fan of gardening! 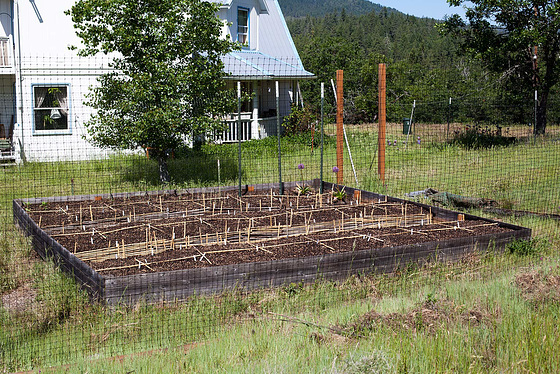 Above is the newly planted raised bed. It was originally built as a single 20' x 20' years ago when we wanted a vegetable garden. Learning from our mistakes, I divided it into three long beds, and used bamboo poles for retaining walls. You can barely see the deer fencing which is 7.5' tall and made of very heavy duty poly plastic. Also, in the upper right corner, you can see the two giant Drumstick Allium which oversee all events taking place!

Steve and I moved to our 26 acre property in southern Oregon about 8 years ago and since then, my opinion about gardening has waxed and waned. At first, we were both so excited about gardening that Steve built a 20' x 20' raised bed which allowed us to raise vegetables. However, when all was said and done, we decided that—with the exception of tomatoes—the experience wasn't really worth the trouble. At that point, I completely abandoned the raised bed, which promptly grew a thick mat of very healthy weeds for the next five years.

When we built the raised bed, we also got a metal feed trough which we filled with soil and planted sunflower seeds. The flowers were magnificent, but once they died the planter sat for years, filled with happy weeds. I thought maybe gardening was all too much bother.

Then, two years ago I began thinking about how nice it would be to have flowers growing in the front yard during the summer. There were lovely crocus, daffodils and bearded iris planted by the previous owners which bloomed from February through May, but I wanted more. So, I yanked all the weeds out of the metal trough, threw some wildflower seeds in and added some gladiolus bulbs. I watered the planter and hoped that something would grow. It turned out to be a fabulous success, with elegant gladiolus blossoms and countless breathtaking wildflowers in many shapes and colors. Unfortunately, at the height of bloom, hungry deer came by and reduced my flourishing garden to almost nothing over the course of two days. In retaliation, I put mesh fencing around the planter and to my amazement, many flowers came back and bloomed for many more weeks. I was delighted. Without much effort, I'd created a beautiful display in our metal trough which lasted for months. It got me thinking, maybe gardening wasn't so bad.

Feeling more positive, that fall I ordered some spring bulbs. I pulled some weeds in the front yard near the metal trough and close to the daffodils, crocus and bearded iris planted before we lived here. I dumped some soil on top of the rocky clay, plugged in the bulbs and waited until spring. What an incredible show that turned out to be! Daffodils, allium, hyacinth, and irises bloomed over the course of several very enjoyable months. In May I threw some wildflower and poppy seeds in the bulb garden area, and a friend gave me some plants that I put in the metal feed trough. To my astonishment, there was a non-stop flower show all the way until the frost hit in November! I did lose some flowers in the bulb garden area to deer, so we put up a motion detecting deer sprayer and they left the poppies alone. I loved every single blossom. I protected the flowers in the metal trough with mesh, and they too, produced stunning flowers which bloomed until the frost laid them to rest. Through the summer, I watered the garden and appreciated the new flowers that bloomed almost every day. At some point, I recognized that something had changed in me. I had fallen in love with my garden, and truly enjoyed spending time out there caring for my plants. In return for watering them and pulling weeds, they rewarded me with breathtaking beauty that continued until the first frost. I was hooked.

This past fall, I ordered even more bulbs to supplement my garden. In fact, I ordered too many. What to do with them all? My eyes wandered over to the raised bed with its forest of weeds. After thinking about it, I reluctantly spent a couple of hours pulling weeds, and managed to clear a small area on one side for the bulbs. I planted many bulbs in the front garden too, and when spring rolled around, I could hardly believe all of the flowers! Again the crocus and tulips were eaten, but the daffodils, hyacinth, allium and iris all put on an amazing show.

The small cleared area of the raised bed was planted with dozens and dozens of tulip, crocus and allium bulbs. However, the deer and other animals came by and pulled them out of dirt and ate them, bulbs and all. I managed to get pictures of exactly one tulip that almost bloomed before it was wolfed down. What a shame, and yet, I cannot be angry at the wildlife for eating food presented to them. The only way to keep flowers in a rural area is to protect them.

I do have two bulbs that survived: a pair of Drumstick Allium which grew tall and undisturbed, one on each side of the cleared area. I eventually decided to move one of them so they would both be together. Knowing all about root stress—especially at this point—I carefully dug out a massive chunk of soil surrounding the bulb and carried it over to a pre-dug hole, placing it gently and pressing the soil into place around it. The transplant resulted in zero stress and the pair look great together and are still in the height of bloom, magnificent and statuesque in the corner of the raised bed.

My front garden is positively radiant right now, and is filled with flowers. Masses of poppies and dainty, colorful wildflowers, interspersed with blue, yellow and white dutch iris, small allium species in purple, yellow and white. Soon the iris and alliums will fade, but the poppy and wildflower show will continue at full force. It's a sight to behold! (The metal trough is also exploding with flowers, surprising me with an overwhelming and unexpected display of Sweet William blossoms that are breathtaking!)

This is my front garden, photographed in mid-May.The daffodils and hyacinths have come and gone, but the show of dutch iris continues, and though you cannot see them, there are small alliums in purple, white and yellow here and there. On May 1, the first poppy bloomed, kicking off the beginning of a non-stop show that will last until winter! It's really hard to capture the beauty of this garden with a picture but you get the general idea...would you just LOOK at all of those poppies?! WOW!!

NEXT: Dreaming of a Big Flower Garden: Time to Get Serious!

Chrissy has particularly liked this article

Oh I just love wild flowers and you've got some wonderful ones here. What a glorious place to live - being surrounded by forests and now you have these gorgeous flowers. We don't have the problem you have with deer, even the cats don't bother them, apart from using the raked over soil as a litter tray!!! I look forward to learning more and more about your gardening exploits.
7 years ago. | Permalink

Gardening in your area differs a lot from over here but you have many of the same flowering plants.
Deer are not a problem here except during winter when they may come and eat the bark from the trees during extreme winters, normally they stay in the nearby forest at all times.
7 years ago. | Permalink

that so reminds me of my own wild flower patch which has been totally wiped out by two years of rain and bad storms
7 years ago. | Permalink
Janet Brien club
has replied to Mickey fez club

Oh, that's too bad, Mickey :(
Well, maybe it will come back if the weather returns to its former patterns...
7 years ago. | Permalink