Great Focus & Soft Backgrounds: A Tutorial - Aperture Sets and Focus Stacking without Rails or Tripod (Prerequisite: You must now how to use Pho… - November  3, 2013
Scuba Diving: The Day I Had a Blue Water Panic Attack - October  2, 2013

Fast & Efficient Commenting Tactics - My apologies for the long wait on this article! This is the next part to my Helpful Guide for Fli… - August 30, 2013
See all articles...

Scuba Diving: The Day I Had a Blue Water Panic Attack

October  2, 2013 - 10 comments
Janet and Steve Brien diving off the coast of Cozumel, Mexico 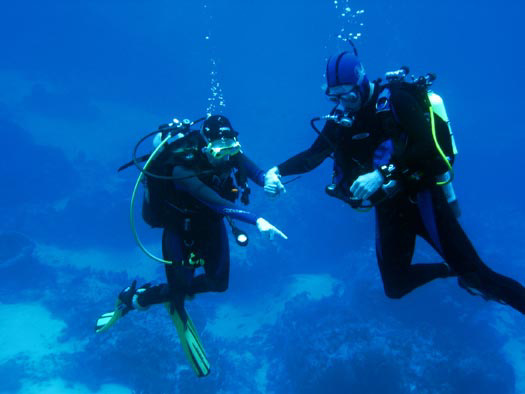 One of the many wonderful people I've met here on ipernity is my friend Jim Boynton (WJB1861) . He shares cool tidbits with each of his images, and he took a picture of a jellyfish which brought to mind a story about scuba diving. Here's the tale and his picture is below…ENJOY!

There was a time when I was learning to dive off the coast of California, near Monterey. My husband was an instructor and he taught me to dive. I was still pretty nervous as a new diver, especially of blue water. Do you know what that term means? To describe blue water, this is when you're in the ocean and you look up and all you can see is blue water. You look out in any direction and all you can see is vast blue water. You look down, and the blue fades to black, which is the only way you can tell which way is up, along with the bubbles coming from your regulator. The feeling of being both completely alone, and feeling suffocated can be very strong, and it does take getting used to before you are ok with it.

This day we were finishing a boat dive (instead of from the shore) and Steve had me work my way up the thick chain anchor line, which was anchored at 60-80 feet and waved slowly up and down from the motion of the boat far above. At about 30 feet, we did our safety stop, which is when you wait for about 10-15 minutes while the oxygen in your blood adjusts to the atmosphere. (This time can be much longer depending on how deep and how long you were down. If you ascend too fast from deep water, you can get an embolism and die—it is a real danger, and people die from this every year).

In this water, the visibility was very poor, about 25 feet. So, when we stopped at 30 feet, I held on and tried to relax. It was hard because the current was very strong and I had to hold on very tightly while my body flapped slowly back and forth behind me like a flag in the water. I felt nervous because this was maybe my second ocean dive and it's scary to realize how truly insignificant you are, how powerful the ocean is, and how potentially deadly diving can be. I kept visualizing myself being swept away like a leaf in a windstorm if I were to lose my grip on the anchor line. I looked down the anchor line and saw it descend into the blackness below. Then I casually looked up and the links of rust-encrusted chain went up, up, up…and disappeared into the light blue water. Then I looked out into the water…and…it was so blue…so blue…and then I saw something…what was that thing drifting this way? Looming into view I saw the largest jellyfish I'd ever seen in my life! A huge creamy yellow-brown bell with tentacles drifting down, down, down, into the blackness. "Wowwwwww…," I thought to myself, it was SO COOL! As it drifted closer, I could see it pulsating rhythmically, letting the current do the job of propulsion. It only pulsed to remain upright in the current. Then, I saw another jellyfish…and another…and…I couldn't believe my eyes, there were so many of them! They were not directly in our path, so although I did get one sting on a cheek, we were not hurt by this passing swarm of jellyfish.

Something about this incredible experience—maybe its strangeness—affected me strongly. Suddenly, and without warning, I felt like I was having a heart attack and was overcome by anxiety and fear. I looked around in fright, my eyes bulging in my mask, but there was nothing to see but the blue water. The sound of my breathing through the regulator was so loud—it was deafening—yet I felt completely alone in a kind of silence that terrified me. Steve was always right there on the opposite side of the anchor line, but I didn't want him to know that I was having a panic attack, so I refused to turn around to see him. I began to breathe too fast and tried to slow it down. I spoke to myself in my head, saying what Steve would tell me. "Janet, you can breathe, right?" I checked and agreed as I breathed in and out, watching the bubbles rise past my face. "You are not hurt and you are not in danger, right?" I agreed. And then I felt Steve's arm on me as he came around to look though his mask into my eyes. He could see that I was afraid and made a questioning sign to me, pointing to me and then making an "O" out of his thumb and forefinger to ask, "Are you OK?" I didn't want him to know I was afraid so I looked away as I nodded. So he touched my chin with a finger and used another signal with two fingers back and forth between our eyes, which means, "LOOK AT ME." He put a hand on my shoulder and rubbed it gently, stroking my cheek with a finger from his other hand. All the while he stared into my eyes with love, showing me that everything was ok. He was there and he would protect me and everything was just fine. Although I had started feeling better after my internal check about breathing, Steve's contact and reassurance made me relax and then, just as quickly as the panic attack had come, it drifted away as if it had never been there. We held hands and looked out into the vast ocean wilderness together, comfortable and relaxed. After a few more minutes, our dive computers beeped to let us know we'd stayed down the proper amount of time for our safety stop and Steve signaled that we could ascend the anchor chain to the surface. I was so happy that I wasn't afraid anymore, and I got to see a real swarm of jellyfish in the ocean! How cool is that?! :D

It is no wonder that some of my best and most meaningful memories have been from my scuba diving adventures. Many of those memories have involved facing and overcoming deep fears, emerging on the other side as a stronger and more confident person. Since that day, I have had many encounters with blue water diving, and I have never had another problem with it! :)

10 comments - The latest ones

Lloyd Bridges would be proud!
7 years ago. Translate | Permalink

I have done a smidge of amateur diving... as a not very strong swimmer... but someone who LOVES the water... I found it gave me a better confidence . Never did enough to satisfy my need for it.. but I valued the sense of self.. the sense of peace.. and the sense of being a part of the Universe it gave me.

The sea still does that.. and I miss it so badly it hurts.

I also understand the panic. I LOVE water.. yet my greatest fear is of drowning.. its an interesting juxtaposition.

Sometimes.. we have to walk to the very very edge to know we are alive.. to KNOW we are capable....with that.. the hardest bit can be the coming back.. I dearly understand the adrenalin junkie thing !

Now.. I look to the stars with my astronomy.. and the "air version" of blue water....

I am glad you walked the edge Janet... you willl never be the same again.. that I can vouch for..but it is a WONDERFUL 'difference"

An amazing experience. One that will obviously stay with you for ever. Thanks for sharing, Janet.
7 years ago. | Permalink

That is a very scary and challenging second dive. A wonderful photo and story.
7 years ago. | Permalink

Great story of your second dive. The description of your panic attack and Steve's reassuring love was very moving and well written. I have only scuba dived once.......about four years ago in Fiji. I just loved it and would love to do it again if I had the chance. It was like being in another world, utterly fascinating.
7 years ago. | Permalink

Fantastic story! Many years ago I was scuby diving too and had a panic attack as well but very strangely due to the underwater waves that were provoced by a ship.
7 years ago. | Permalink
Janet Brien club
has replied to Gerda

Not strange at all, Gerda. Being underwater is so different that it's easy to become confused, disoriented, and uncomfortable. Until you understood that those waves were not threat to you, it could be quite frightening. Learning to scuba dive is a process of overcoming fears, and these are different for everyone. I'm glad that you got through your panic attack ok!! :)
7 years ago. | Permalink

Janet Smith
Hey you amazing story truly amazing ......... I love it that story what an amazing memory. How cool to see all those jelly fish. What an experience. Way to go by talking yourself out of your uncertainty and wonderful too that Steve was there for you....so glad to find you on this sight Janet I've missed your beautiful photos and your heart warming posts. Take care my friend :)
7 years ago. | Permalink

I so enjoyed reading and a fine image. For about 4 years we went to Cozumel. My husband and son dove with our group allot of different places and I so remember them talking of Blue Water. WOW.
7 years ago. | Permalink

I last looked at this photo 6 years ago. What a tough second dive. My first few dives were in Bermuda where it bottomed out at around 30 feet. The diving was much tamer there.
15 months ago. | Permalink