The big face-plant - Ladies and gentlemen: I cannot addequately express the depth of relief of millions of Americans who… - November  8, 2020
Fires in the Western United States - September 12, 2020

The hysteria of rural whites - If you've got the patience, you might check out this report on NBCNews.com : " In Klamath Falls,… - June  7, 2020
See all articles...

Fires in the Western United States

September 12, 2020 - 16 comments   |   Translate title into English
Can it get worse than a pandemic, record-breaking heat and a science-denying president?

Yes, it can. All of that plus raging fires over big swathes of California, Oregon and Washington. If you don't know already, I live in southern Oregon. The closest fire to me is about 15 miles (24 km) north. The wind is currently blowing it toward the NW, but that changes, of course. There are so many fires all around that thick smoke is blanketing the entire region, making it highly undesireable to go outside.

Just so I'll be even MORE nervous, my son works the fires as an employee of the US Forest Service. He's not one of those people running up mountains with shovels - that's for the younger, newer guys - thank goodness! He's in charge of "fire cache" operations. Everything necessary to fight fires is strategically stashed at supply warehouses in every National Forest. He does also have to cut fire trails in a 'dozer or drive water tankers to the fire camps. Still, the way these wind driven mega-fires are behaving I do worry.

This is, indeed a catastrophic fire season, and it has only just begun. Here is a current map of fires, west coast is the worst by far, but the entire western US is dry as a bone and also having fire outbreaks. (There is less vegetation to burn in the southwest and the plains states) 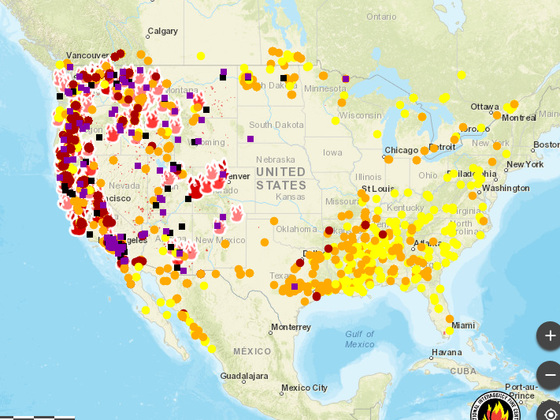 I think the yellow dots signify "hot spots" detected by the Dept. of Forestry. I don't know what all of the specific symbols signify, but the purple squares happen to match up with the fire caches in my region of Oregon. Klamath Falls is near the bottom of this map and the state line with California is below that: 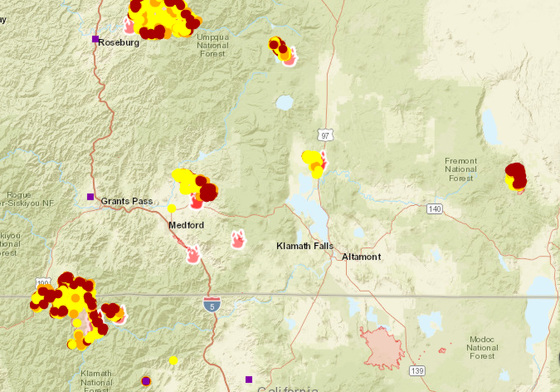 The map on the website is interactive. Clicking on symbols gives detailed information about the fire, including the acreage involved and other statistics I don't understand. The governor of California, Gavin Newsom, gave a scathing press conference from a smokey forest about climate change and the change-deniers. Worth a watch on Youtube to get an idea of the political leadership in the three coastal states: www.youtube.com/watch

"This a climate damn emergency. This is real."
Gov. Gavin Newsom, California

EDIT: Corrected the governor's name, which is Newsom (no e at the end).

16 comments - The latest ones

I'm very worried, despite being over the other side of the pond, these things eventually affect everybody, not just "locals". We have the other side of the coin atm - excessive downpours of rain causing landslips and general flooding ...
Doing my bit to be as "carbon neutral" and avoiding plastic & pollution as much as I can.

It's all we can do - our bit! I'm safe, many thousands of others are not. I do keep up with the local fire news to see how things are progressing. So far, none of the fires is "under control."

Thank you, StoneRoad.
2 years ago. | Permalink

How terrible and frightening for you Diane hopefully the fires don't turn on you, We too live near forest but not close enough to worry about the safety of the house, Fires do occur near us started mainly by children but quickly dealt with by the services. Once the fires start to die down no doubt we will be hearing from Donald Trump what a great job he did putting out the flames !!!!!!. Reminds me of the saying "You can fool some people some of the time but you can't fool all the people all the time".
Stay safe and keep well.
2 years ago. Edited 2 years ago. | Permalink
Diane Putnam club
has replied to HappySnapper club

I am sure he will take credit for...well, everything! He is the reason the sky is blue and the earth is...well, flat, in his case. Thank you, HS, I appreciate your comment.
2 years ago. | Permalink

Yes I saw Newsome's thoroughly justified rant!
Stay safe Diane, from both threats. No. From all three (fire, Covid and Tr..p!)
2 years ago. | Permalink
Diane Putnam club
has replied to Andy Rodker club

Maybe we should add the hurricane now heading for Louisiana two weeks after a tropical storm tore things up.

I've had my eye on Newsom since he was the mayor of San Francisco. I remember thinking he might be someone to run for prez some day. I feel more strongly about that, now, and his speaking style is much more spontaneous than his SF days. '
2 years ago. | Permalink

It's really bad to read all this. I wish you all the best.
2 years ago. | Permalink
Diane Putnam club
has replied to jeybee68 club

Thank you, jeybee, I am keeping alert and safe!
2 years ago. | Permalink

This is extremely worrying, I hope you all manage to get through it safely! The really bad thing is that fires like this are going to get more frequent with rising temperatures:-(
2 years ago. Edited 2 years ago. | Permalink
Diane Putnam club
has replied to Gudrun club

Yes, they are. What a depressing thought. I was shocked when the temp was 121 F (49.4 C) in Los Angeles! I wonder how many elderly, sick, homeless or poor people died that day. No air conditioning? Too bad for you!
2 years ago. | Permalink

Take care Diane...I hope this all will find an end soon...
2 years ago. | Permalink
Diane Putnam club
has replied to Tanja - Loughcrew club

Know that you and your loved ones are on my mind, Diane. I am sorry.
2 years ago. | Permalink
Diane Putnam club
has replied to Smiley Derleth club

Thank you, Smiley. You are always kind and encouraging and I appreciate it very much.
2 years ago. | Permalink

Thinking of you, Diane. We were surrounded by fires last summer, and friends lost homes. We both volunteer with Fire Brigade. John at 68 was out in 45C heat, fighting fires which were consuming homes..,for several days. It was a nightmare. I have been watching in horror the situation in Oregon. Stay safe..
2 years ago. | Permalink
Diane Putnam club
has replied to Diana Australis club

Yes, I followed those fires very closely! It was a horrible time, Diana. I am fine, thank goodness. There are refugees in town who had to run from the fires.
2 years ago. | Permalink