Cabin fever - There are so many fires around Oregon and California that most people are staying inside whenever po… - July 24, 2018
See all articles...

August 22, 2018 - 10 comments   |   Translate title into English
Not really! Just fire and smoke. Here is a brief whine (whinge, if you're British) about how summer is going where I live.
The worst summer of smoke in Klamath Falls, Oregon.

The photo below (see source) shows what July and August have looked like. Some days lighter than this photo, but many, especially in August, have been as below. The low hills beyond the trees are invisible. 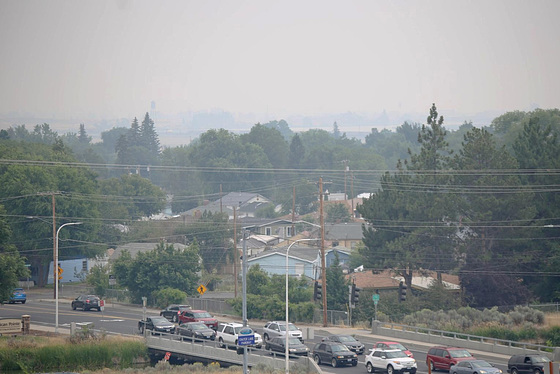 Temperatures have been in the 90s (32-37C), adding to the feeling of suffocation. Good weather news, though, we are due to have temps in the 70s (23-26C) beginning this Friday.

A screengrab from the Inciweb map showing currently active fires encircling the Klamath Basin. K.Falls is approximately below the blue arrow. The straight horizontal line is the border between Oregon and California. To the right of the vertical line is Nevada. 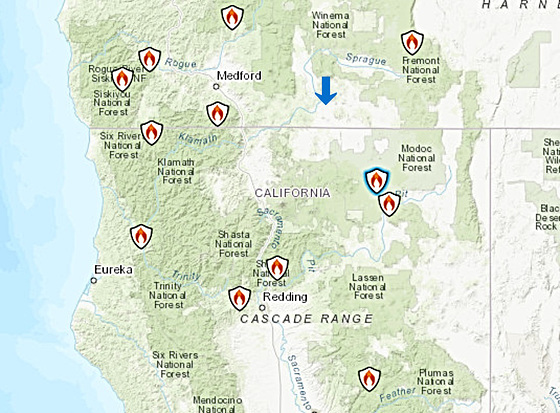 The fire icon to the right of Redding, California, is the largest wildfire in that state's history. Wind is commonly southwesterly or westerly in the above area, delivering the smoke from many fires above to the broad natural basin where I live. Go to the interactive map to see all active continental US fires:
inciweb.nwcg.gov/incident/5968/

Does anyone know of an incident map that shows all active North Amerian fires? I've found one that shows Canadian and Mexican fires ("hot spots," technically) until you zoom out enough to see all of them: Arcgis.com tinyurl.com/y9fvbfvf Another one I looked at in the search that was titled North American Forest Fire Incident System showed a single fire - in Montana! fires.globalincidentmap.com/home.php

10 comments - The latest ones

Here in Denmark we have had summers with many crop and forest fires, the same appliesfor Europe (also this year especially Portugal) I have seen theresults of one majormountai forest fire in the 'Maritime Alps' southern France in 1978.
4 years ago. | Permalink

No fire in North of France, but summer 2018 was generous, warm and dry.
4 years ago. | Permalink

It's been very hot in England - there's been a few fires here and there, some of them deliberately set! :-( In fact, despite the apparently duller weather it still is warm!
4 years ago. | Permalink
Diane Putnam club
has replied to The Chairman 8

Every year there are several arson fires here, too. One in California grew into the largest fire ever in that state. Hard to fathom.
4 years ago. Translate | Permalink

Thanks for the links, Diane.
Very interesting, but of course it 'just happens' .. as there is NCC [ aka No Climate Change ]...
sigh......
Don't you want to sometimes smack those jerks !
4 years ago. | Permalink
Diane Putnam club
has replied to Peggy C club

Here is a map of all USA fires. A few Canadian fires were included because they fit in the rectangle of the map. fsapps.nwcg.gov/afm/index.php
4 years ago. | Permalink
Diane Putnam club
has replied to Ronald Losure club

Thanks for that. It's frustrating - not as if the effects stop at the borders!
4 years ago. | Permalink

Oh, how I would love to send these places our rain!
4 years ago. | Permalink

A friend of mine in Seattle posted a photo today taken this morning.

Bad as yours is Diane... her pic makes yours look like a clear blue sky day.

Its really frightening. Thick as deep fog and yellow/grey.. and they have been living with a variation of this for some time.
4 years ago. | Permalink